Orgelmakerij van der Putten (Winschoten/Stapelmoor) has recently completed the first of a small series of newly set up type chest organs with two stops. We intended to optimize the experiences with the chest organs made since 1989, such as greater accessibility of the pipework to tune it faster, or to easily apply a different tuning. The pipes can be tuned through the lectern opening. 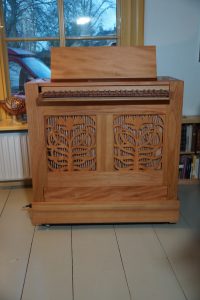 Only two transposition options were chosen, because the two other options available with the older chest organs were rarely used in practice. The scales and voicing methods of Holpijp and Roerfluit were maintained. This instrument was built for a private owner in the province of Groningen. She also designed the woodcarvings, (vegetable motifs, including bulrushes, for example) in the open panels on all sides. To keep the instrument small, we decided to make it with two stops, the disposition is: Holpijp 8 ft bass/treble (stopped) Roerfluit 4 ft bass/treble (stopped, from e with hole in the stop, highest octave open with pewter tuning flap).

As with nearly all of our instruments, the organ case is made from Libanon Ceder.

We made windchest and the mechanism as much as possible of Western red Cedar; because of its low weight. Other parts are made from brass. The stop action has standing iron rollers with brass arms.

Keyboard: the naturals are covered with pear wood, the upper keys have an ebony strip

In contrast to the earlier chestorgans, the lower case (dimensions 95 wide x 45 deep x 15 cm high) is much lower and contains only the blower and the bellow. Windchest, pipes and mechanisms are located in the upper case (92 x 42 x 75 cm).

Do you have questions about this instruments? Please ask! 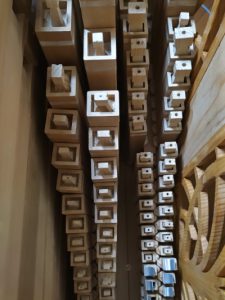 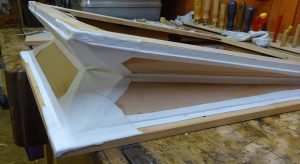 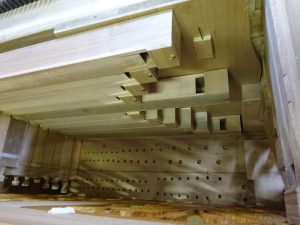 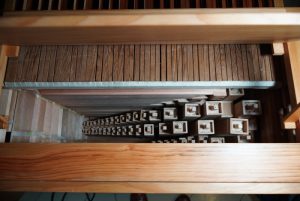 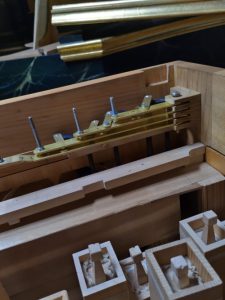 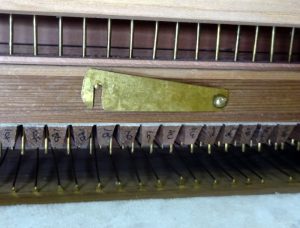